Where have I been

I’m guessing you noticed the media silence. Unless you follow me on Instagram I doubt you have any idea what’s happened so here we go.

Guys I got really sick. I went from ear infection to meningitis plus worse scare to just two bits of my body falling out. That’s a lot to deal within a week of doctors’ appointments I say week it was 5 days. So buckle in and I will explain who what where and why. I would also like to say aside from the body aches it was a lot emotionally and physically in such a short amount of time.

I’m sure I mentioned I had a monster panic attack and I was just getting to my normal after it. I then decided I would grow some ovarian cysts cause what else was I going to do in lockdown. Well just as they started to settle down, I got a BEAST of an earache.

Thinking it was nothing to be worried about I carried on well after 5 days I went to the doctors. I was seen in person while wearing appropriate PPE and was told I had two bulging eardrums which meant I might have double inner ear infection. I was prescribed 5 day’s worth of antibiotics and told to ring back on day four if nothing had improved. Fast forward to day four I felt worse and I was walking into the door frames (Fun right) and I was so dizzy any movement of my head was disorientating. Also, the headache across the back of my head was killer.

I rang my doctors like sorry the antibiotics haven’t worked which then lead to a video chat with my new doctor. He thought it might be mastoiditis which is nasty. Here’s a quick rundown given the time frame of eight days he was worried as if left untreated, mastoiditis can cause some serious problems, including hearing loss, blood clot, meningitis, or a brain abscess. So, I was told try two of the higher strength antibiotics and I felt no better to go to the hospital no ifs no buts.

I didn’t feel any better so on Wednesday I put my mask on and went to the hospital by this point my neck had gone stiff my dizziness was worse. Everyone was really nice and even with the current pandemic and heat. While in the hospital my mouth decided it was going to cover itself in blister (I know great timing). Once the ball got rolling, I was given a three-step plan before we got to the scary stuff. Thankfully we worked it on the step before things got stabby.  Also, side note my GP rang to make sure I had followed instructions, I do listen sometime.

Turns out my temporomandibular joint and ear decided to have a falling out and a slagging match. We don’t know who upset who but they majorly fell out. The blister was a sign that my body was starting to struggle to fight. Which meant I was given a list of immune boosters and vitamins to take as well as carrying on my course of antibiotics.

Here we are almost two weeks later I can move my head again and I’ve stopped walking into things. Walking into things has been replaced by late mornings, midday naps and a lot of vitamins in the morning but it’s a better place and I like here compared to where I was. Even while writing this I'm here like I need to be nicer myself and my body. I need to let it recover properly and look after it better not like I'm mean to it. Yes I did get myself some sunflowers.

Well, that is that my dear Reader… 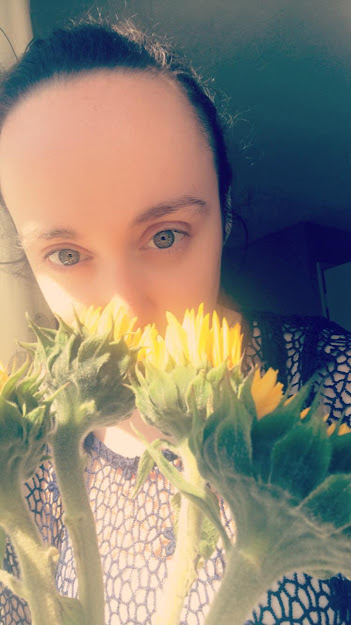