First of thank you, Tandem Collective and Bloomsbury, for sending me a physical copy of Cinderella is Dead by Kalynn Bayron. 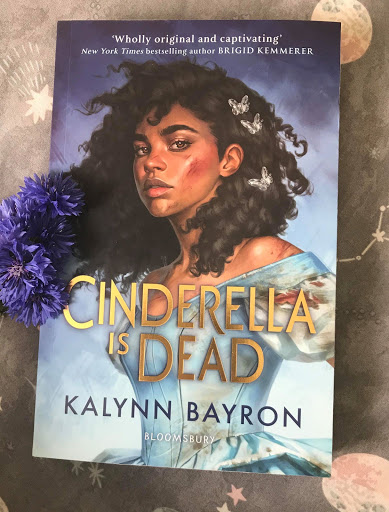 Imagine a world where instead of any holy literature there is the tale of Cinderella, her Prince Charming and horrible stepmother and stepsisters. What if that tale is now law and a lie?

This book was so interesting to me because this book enveloped me to the point, I was imaging what would happen if this was our reality? Could I cope with going to the ball to be leered at by men paraded around and my ability to be chosen at my first ball as my worth? Nah, Hun! Could I put my faith in a Fairy Godmother who hasn’t been seen in 200 years to make me look magical or spend almost a whole day getting ready to make it look like she did? It just sounds like a lot of effort and stress not to include the shame of not being picked at your first ball.

This book is such as easy read and people who I was on the read-along agreed as they also effortlessly read past the prompts. In fact, I read the book in about two sittings once it has it hands on you it doesn’t let go. Despite reading the press release I still kinda thought this might be a retelling and I am so glad I was wrong. It takes the Cinderella stories we know and mushes them together and adds its own unique layers that make this book so unique and complex.  In Cinderella is Dead, our heroines don't need a handsome prince to save them from dark fates they rescue themselves and shred the unjust, patriarchal systems in the process.

There are a couple of important topics woven through this tale LGBTQ+ rights, women's rights and a clear wealth divide.  The exploration of misogyny, sexism, and homophobia in this book is about as subtle as a brick to the face. But people with the same view as the villains in this book exist in the real world and we shouldn’t be fooled into only believing its only “Fictional Villains”.

Now to our protagonist Sophia, she is a great character she’s “stubborn” because doesn’t just take everything at face value. She questions the things she was taught growing up, which in this book world is very brave. She wants to live a beautiful, free life with her girlfriend, not the property of some man she doesn’t know.  Sophia is smart and has noticed the harsh reality that many of the marriages that result from the ball are anything but happy.

If Sophia refuses to attend the ball, she would ruin her family they would all be taken as forfeit which means they disappear. Sophia goes to the ball a fire burning deep in her core to rise against this unjust treatment but also with a need to protect her family. But disaster strikes, and soon Sophia is on the run with another girl.

Constance, I love her! From her fiery red hair to her freckles she is one of the best love interests I’ve read in a long time! her and Sophia complement each other beautifully. Constance is the strong badass that doesn’t have time for fools. They team up and become a fierce two-woman resistance against the king.

This is a beautiful story of bravery, and it shows that if you believe in yourself, you can move mountains. There were so many twists and turns you can see them coming, and I loved the effortless way Kalynn turned this classic fairy-tale on its head to make it a modern anthem of feminism and empowerment. Go read it!!