Welcome to the first true crime Tuesday post. Today we are going to focus on one of the most notorious British Gangsters the Kray Twins. The twins terrorised London in the 50s and 60s with their gang, "The Firm". Murder, armed robbery, arson, protection rackets, assaults - they were involved in it all. The film starring Tom Hardy as both Ronnie and Reggie Kray catapulted these guys back into the limelight five years ago.  With these posts I will just be brushing the tip of the iceberg I am going to try to keep them to 500 words tops.

I am using  a image I have found through google I do not own any rights and am using the image purely for informational purposes (Fair use under the copyright act sections 29 and 30). 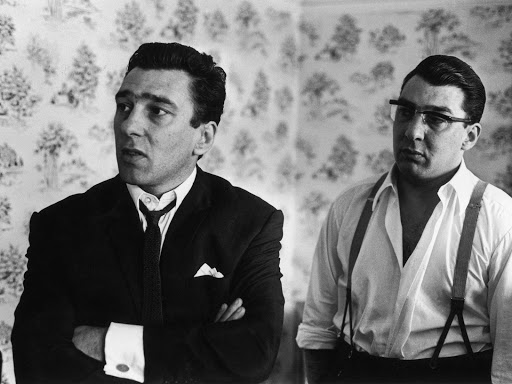 Ronnie and Reggie Kray were born on October 24th, 1933.  The Krays were called up to do National Service in the British Army in March 1952. Although the pair reported to the depot of the Royal Fusiliers, they attempted to leave after only a few minutes. When the corporal in charge tried to stop them, he was seriously injured by Ronnie who punched him on the jaw. The Krays walked back to their East End home. They were arrested the next morning by the police and turned over to the army. While absent without leave again, they assaulted a police constable who tried to arrest them. Random fact they became among the last prisoners to be held at the Tower of London. After they were convicted, both were sent to the Buffs' Home Counties Brigade Depot jail.

When it became clear they were both to be dishonourably discharged from the army, the Krays' behaviour became worse. Their criminal records and dishonourable discharges from the Royal Fusiliers ended their boxing careers, and the brothers turned to crime full-time. In the 1950s they first moved into “protection” which meant they demanded money from businesses who would face brutal reprisals for not paying up. And it paid off handsomely for the twins. Peter Rachman, head of a landlord operation, sold Reggie a nightclub called Esmeralda's Barn, to ward off threats of further extortion. This increased the Krays' influence in the West End by making them celebrities as well as criminals. Esmeralda's Barn celebrity guest list includes the likes of Judy Garland and Barbara Windsor.

On May 9, 1968, the police arrested both Krays at their mother’s flat. A year later, they received life behind bars for the murders of Cornell and McVitie. Even in prison, they never strayed from their scheming ways and operated bodyguards for celebrity’s from behind bars, with Frank Sinatra reportedly one of their clients.

Ronnie was in Broadmoor Hospital until he died on March 17th, 1995 from a heart attack. Reggie was released from prison on compassionate grounds in August 2000 and died from bladder cancer nearly nine weeks later. But the duo are considered folk heroes to some. At both funerals, people lined the streets as they were driven to their final resting places, near their beloved mum.