So I have just watched Mulan on Disney+ (it finished at 1pm how’s that for a turn a round).  It was amazing!!! Side note: I do not in any way support Liu Yifei views to the point Mulan isn’t going to be mentioned other than in the title if I can help it. I do not own the image it is being used under fair use sections 29 and 30. Spoilers. 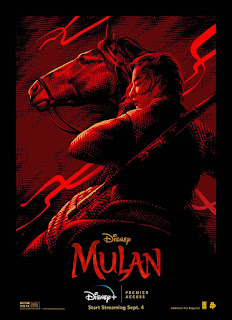 I was 5 when the animated film came out it was the first Disney film with a strong independent female lead. It opened my 5-year-old eyes to the fact girls didn’t have to be too girly and that they could be strong. Up until this point I think I had Megara in Hercules and was still happy to Disney princess waiting to be rescued. It opened the doors for Mother Goose to show me other strong women such as Captain Janeway and Xena: Warrior Princess because of this Mulan hold a special place in my heart and how I became who I am.

Some of the problems I thought I was going to have with the film was the songs being taken out like come on how much of a power ballad is reflection…Awkward I didn’t actually mind. There are also little Easter eggs characters recite entire lyrics in scenes from the songs that have been removed which a cute little detail.

The only thing I can honestly say I only missed two scenes. The first was the whole sneaking out and cutting her hair scene but this is replaced with a father-daughter chat which is I guess adds more emotion. The second was the matchmaker scene and I can’t believe these words are going to come out of my mouth but the animation scene seems a little more plausible. Just another reminder Mushu has been replaced with a vibrant phoenix as a nod to the family’s ancestral roots. Also, a round of applause for Cricket nice little loophole.

In this live-action remake, the namesake isn’t the only strong female character we also have Xianniang played by the talented Li Gong. The two time I am going to mention the name but Mulan is single handily upstaged by Xianniang more than once. Yes, she has been invented for the film but it gives Mulan a strong female opponent.

Xianniang embodies the vengeful bitterness of a woman misunderstood and ultimately exiled by a sexist society oh and she’s A shape-shifting hawk.  Xianniang is such a brilliant character not only has she got one of the best character arcs I’ve seen in a while and despite being so “evil” she’s way to easy to relate too. Don’t be shady I know I’m a Disney Villain.  She is portrayed wonderfully and if Disney wants to give her a standalone, I will champion it!

Böri Khan played by Jason Scott Lee is our bad guy and he is such a good bad guy and he brings a whole new layer to him that just makes him outright nasty. I think what adds to his villainy is how he explains to Xianniang, that he has promised her that when he rules China, she will no longer be an outcast. However, he needs her help to do it.

Honestly its worth a watch even for the nostalgic feels or to see why Xianniang should have a standalone.