Thank you, Prophecy PR, for reaching out and for a link to watch The Extraordinary Ordinary. Also I do not own the image it is being used under fair use sections 29 and 30.

The Extraordinary Ordinary is a film by Natalie Rodriguez. Round of applause to Natalie because not only did she direct this feature film, she also wrote and produced it. The film stars Maddison Bullock, Alex Montalban, John Posey, and Ana Marte. 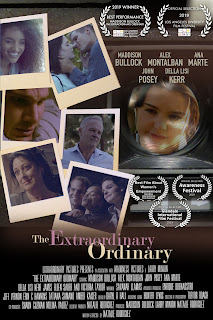 It might be a surprise to hear as I have been open about it but I have anxiety with sprinkles of depression that decides to raise its ugly head now and then. I will just say if you are not in the right headspace this film might be a little much as the panic and anxiety attacks shown in the film were very realistic. But I will mention they weren’t just used as a topical device. I honestly think this film has done a great job of raising Mental Health awareness and allowing people an insight into the minds of others.

This film follows three young adults with a history of mental health issues and how they learn to cope with triggers when old wounds resurface. We also get to see a very realistic portrayal and glimpse into the life of someone experiencing PTSD. It also shows that different people cope with anxiety and depression in different ways and although it might be the same diagnosis. The film exposes the vulnerability and constant struggle of people trying to recover from traumatic events. Please don’t think this film is all doom and gloom this is also a gripping and a heart felt story.

The film hides no secret about wanting to challenge the stigmas associated with mental health, trauma, and recovery and it has been done wonderfully. I wasn’t only impressed with the cast and their acting but also the way the film has been written as the representations feel realistic and not forced. It is clear the vision for this film has come from the heart, not someone trying to be topical or exploiting the genre.

This film hits the realism on the head you can easily forget in moments that everyone is fighting their own battle which is what happens a lot in real life. I’ve had it happen myself when someone I know has seen a post when I’ve posted about my own mental health and they are like I had no idea. You can tell the relation between Erica and Bianca is a genuine friendship that is easy to relate too. So, another well done for this level of realism.

I think one of the most important things to take away from this film is that it shows that you are not alone with your struggles with anxiety and depression and that the road to recovery is paved with more love, understanding, and a support structure you could have never imagined. Which can help people find their purpose and light. This film honestly shows you the value of communication and support within a group of people and how much people can overcome.

Please watch this movie if you need a reminder you are not alone or if  you know someone who struggles with their mental health.