Thank you, Stephen and Quirk for sending me an ebook copy of William Shakespeare's The Taming of the Clueless by Ian Doescher for free in exchange for an honest review. 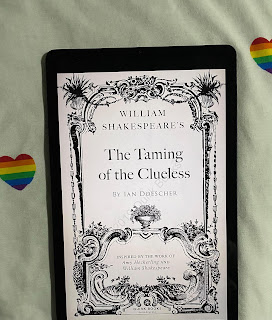 This is the second book that I have ready by Ian Doescher the first was William Shakespeare's Much Ado About Mean Girls. Which means I’m a little softened up and was more than ready to read this book. Also, as a child of the 90s, I love Clueless and still do its one of the films that have special childhood memories.

To the book review, this parody novel takes 90’s teen movie Clueless and gives it a Shakespeare makeover, as the script is rewritten and embellished in the style of the Bard the lovely iambic pentameter. This series is such a gem and I have so much love for anyone who is clever enough to write Shakespearean inspired plays based on popular modern movies in our culture.  Taking centre stage is Cher, the fairest maiden in Beverly Hills, discovering that she is totally clueless.

Clueless is all fun and games while sticking close to the film for the most part, even to including some of the songs from the soundtrack reinvented as Shakespearian ballads. Clueless its self is such a treat for literary geeks we mustn’t forget this wonderful movie is already based loosely on a wonderful novel and because that isn’t enough it has now been reimagined as a Shakespeare Romance.

The translated dialogue is hilarious in general, and I think Ian outdid himself with this one with some Austen Easter Eggs as well as swapping out technology to ground it in the original time period. Honestly, for me, half the fun is scouring the pages for the delightful Easter eggs and references and this book delivers. The illustrations were a nice touch and overall, this was just everything I wanted and needed

I love a reimagining and I eagerly await the next one!