Half Time: Nigel Owens : the Autobiography by Lynn Davies and Nigel Owens

I am a huge rugby fan and have been lucky enough to see a fair few games in person and even luckier to see three games refereed by Nigel. I can honestly say I have never got ref link quicker; I will be sharing my favourite Nigel quotes to round up this review of his first autobiography. I can hear you asking why am I reviewing this book now it’s been out for ages well he retired in December 2020 and each match since something has been missing so I need Nigel back in my life. Also loved the fact he got a little commentary in the last six nations game #NigelOwensforCommentator. 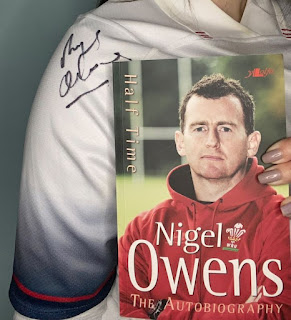 So, who is this man I am going on about and sounding a little stalkerish on? Nigel Owens is one of the best referees in world rugby and was one of the first people in the “Macho” world of rugby to announce that he was gay. His bravery earned him admiration from players, officials, and supporters all over the world.

For me this was a fantastic book cannot praise Nigel enough he has really opened his heart up doing this book it wouldn’t have been easy to talk frankly about his struggle to accept himself for who he was, leading to attempted suicide, bulimia, and steroid addiction. He honestly is an inspirational to anybody no matter what walk of life they come from not just the rugby fans, he dragged himself up from rock bottom to become one of the influential rugby referees in the world.

Reading this book added more to the admiration I already had for him, there is a touching moment where he thanks the people who helped at his mum’s funeral what a nice little show of appreciation and a human touch compared to other autobiography’s I’ve read. This book isn’t all doom and gloom though Nigel recounts amusing incidents from rugby matches, foreign trips and his off-field career as an entertainer.

One thing I will say having read the blurb for full time his second autobiography coming out October this year that he held back a little during this book as at the time he was still employed as a referee and let’s be honest the book would have been vetted and edit to hell to cover everyone. As the blurb says, “With his contract with the Welsh Rugby Union having come to an end in 2020, he is free to reveal all about his career since his previous autobiography”. That isn’t to say this is a bad book he really does deserve praise for the way he talks of his personal life as a young man struggling with identity and health issues.

"I'm straighter than that one"

"You don't like to scrummage? Well if you don't, you're in the wrong position"

“The hands-out law changed three years ago, where have you been?”

“I don’t think we’ve met before, but I’m the referee.”