Thank you, Sarah, and Titan Books, for sending me a copy of Nettle and Bone by T. Kingfisher for free in exchange for an honest review. 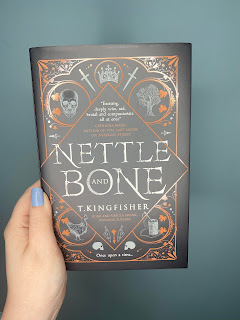 This is the first book I have read by T. Kingfisher, and I have to say I loved the writing style and will be picking up more from book’s by this author. In fact I have added A Wizard’s Guide to Defensive Baking to my kindle. Just a little note about this book I did start it with brain fog and restarted it once I had recovered but this story isn’t told chronologically so it took me a minute to find my bearings.

Nettle & Bone follows Princess Marra of the Harbor Kingdom on a quest to save her sister. Marra gathers an unlikely group of characters to help her with her task - to kill the king. At the very start of Nettle & Bone this book bares its teeth, Marra has decide that she will not become another female causality and end up being married off in the name of security for her kingdom. After watching her sister suffer abuse and humiliation from a prince who acts like a spoilt child. Marra questions and challenges the predictability of men, especially when it comes to a sense of entitlement to women’s bodies. The story is full to the brim with this fantastical feminist fury, and I am living for it.

Being the third-born daughter and after seeing a never-ending cycle of chaos and torture reign upon her sisters. Despite being timid and convent raised Marra's only concern is getting Kania out of danger. She is willing to do anything to free her sister after coming to the realisation that no one else will be coming to help.

The expectation that women will simply churn out kids without complaint beautifully ripped apart by Kingfisher, the Prince in question, has his sights set on a male heir. If this second sister can't produce one for him, guess who is next in line? However, in that vein Its refreshing to have such an honest portrayal for a character like Marra, who doesn’t appear to have any interest in bearing children. Unsure how to even begin, Marra enlists the help of a powerful Dust wife, who only agree to help if Marra can achieve three impossible tasks but as with any fairy-tale, that is just the beginning. Just a quick shout out I think the dust wife is one of my favourite fantasy character this year so far and another shoutout to the Dust Wife's hen, who happens to be possessed by a demon because why not.

This was a whimsical, dark fairy-tale that drew me in from the very beginning. I felt like every piece of world building and characterisation came together so effortlessly, and no info dump or details stood in the way of progress at any stage. I really appreciated the underlying commentary about how those in power, particularly men, often get away with cruel acts. I can't say enough about how enjoyable it was from start to finish once brain fog had lifted.

It was creepy, horrifying, funny, grim, and fascinating. I know this book is 308 pages, but I wanted so much more but I know that's just me being greedy because of how great this story was. If by chance T. Kingfisher wants to jump back into this books world and another book is announced I may explode into black glitter.