Sashay to the Centre of the Earth by Chris McCrudden (Gifted)

Thank you so much to Chris McCrudden for sending me a copy of Sashay to the Centre of the Earth for free in exchange for an honest review. I was lucky enough to be sent Battle beyond the Dolestars back in 2020 check out my review here. 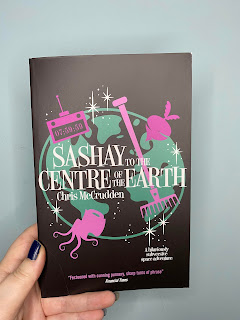 I'm so sad to see this series end. This is one of the most absurd series I've read, and I loved every part of it. As I brought up in my review of Battle beyond the Dolestars I loved the Red Dwarf books, and this is in the same comedy stream. I adore Chris’s sense of humour and just from the comedy in the books alone we have similar funny bones.

Just like its predecessor this book is cunningly written, cementing the Battlestar Suburbia series both memorable, with many plays on nostalgia and a secret mission. It might be because I was watching Ru Pauls Drag race UK vs the World not long before I was sent this book, I was living for how flamboyant this book is to the extent I added the first two books back on to TBR to check if the first two books were as flamboyant. I blame drag race. To say this universe Chris has created is camp is an understatement! Sashay to the Centre of the Earth takes tropes and clichés and twists them around in the same vein as Douglas Adams or Terry Pratchett.

Chris knows his sci-fi and adventure stories well and even if you strip the book of its puns and one liner, the story can still stand as a fun adventure. This book is full of alien civilisations, secret missions and parody set against an ecological decline and a fight for survival. The humans and machines have to find a way to live in at least respect if not peace,  and figure out exactly how they're going to share the solar system.

Don’t be fooled into think the tone of the book is too light, the story has enough weight to make you care and keep on reading. Chris has a talent of being able to write about modernity and politics with plenty of absurd chaos and cheesy humour that you don’t realise till after like okay that’s actually rather serious, and I laughed.

Even though this is the third book in the series the humour, quips and play on nostalgia is still as good in this book as it was the first two books. I think one of the reasons I love this series so much is I grew up watching Red Dwarf and British pop-culture. The drag queen names are enough to tickle even the more straightlaced reader.

Sashay to the Centre of the Earth is exactly what I'd hoped it would it be Fast paced, action packed and highly entertaining full of wit and satire and worth a read.