The Elephant in the room Depp vs Herd

Before we start this post is going to be talking about domestic violence, please if you are having a bad mental health day give this post a skip.

I want to start this post by saying that when this trial started, I was open to the idea that I might have been wrong and Ms Heard could have had evidence to prove her claims and completely open to the fact I could have been wrong, and Johnny could have been an abuser. I have watched the trail every day from the start on YouTube. I really don’t want to delve too far into my opinion on the trial, but I do have a commentary on the worrying things that I have seen on social media.

Before I get into the worrying side the positive things, I have seen is the taboo around men being victims of domestic violence has been broken open slightly. I have seen more men speaking out about their experiences and this cant been seen as a bad thing.

I know statistically speaking women are abused more than men there is no denying that, on the Menkind website says that one in 6-7 men and one in 4 women will be a victim of domestic abuse in their lifetime. Through my own personal experience knowing and witnessing domestic abuse against men I know. The men I know personally despite pleading have never gone to the police or reported anything. Also, I think the men statistics may be slightly off as the taboo around men being abused is still poignant.

If I’m honest there will be no winners or losers from this trail as everyone from any side in the case is going to lose. From the camp against Ms Heard its now harder for genuine victims of domestic abuse to come forward. For the camp in favour of Ms Heard a female domestic victim is being ignored. From the camp against Johnny, it can be shown as ingrained misogyny. For the camp in favour of Johnny, a male domestic victim is being ignored.

No one is going to win the real victims in this case are the everyday people not the celebrities going through this. From both female and male victims currently hiding and afraid to speak because they don’t think, they will be believed to the abusers feeling invincible as they are seeing a high-profile abuser get away with it.

My dear reader I will leave you with something to consider, before I make this statement, I would like to say I’m not saying Johnny is a saint and picking a side. But just think if a male abuser was caught on voice recording saying “I didn't punch you... I was hitting you, it was not punching you. You didn't get punched, you got hit... I did not f****** deck you, I f****** was hitting you.” Would this case have been opened and closed case or would it have been dragged out like this. 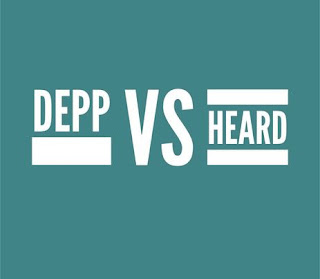