Beneath Cruel Waters by Jon Bassoff

Thank you, Kristen, from Mindbuck Media Book Publicity, for reaching out and sending me a copy of Beneath Cruel Waters by Jon Bassoff for free in exchange for an honest review. 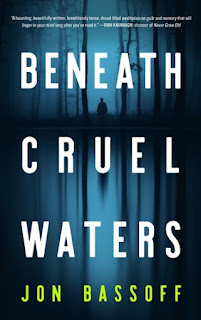 This book is not all nice with unicorns, rainbows and sparkles it is a dark, disturbing mystery. Jon has skilfully created an atmosphere of trepidation and struggle with a little sprinkle of spookiness dusted on top. I wouldn’t call this book a slow burn, but everything about it plays out perfectly. Jon writes beautifully and knows the right way to hook readers. I was hooked from the first couple of pages. While this story is like very much like punch to the gut the writing is crisp and concise without any unnecessary embellishment, I am honestly still in awe of what he accomplishes in this book.

I have seen other reviewers make comments about how this book is more of a character study as this book is told through three different points of view and you get to spend a lot of time in each character's inner thoughts, and I would have to agree with them, and I loved it. It manages to take this book from a normal mainstream thriller to a whole other level. I guess I just like phycology and glimpse into people’s deepest thoughts and motives.

If I’m truthful the books main twists aren’t shocking but that doesn’t mean they are predictable in anyway but what I will say that they are handled skilfully. Jon has done a magnificent job of keeping his book cemented as an everyday tragedy in a small town ruled by religion that he keeps believable. This might be a personal observation because I have been watching a lot of true crime documentaries recently. Jon managed to keep the books secrets all the way till the end but don’t worry everything is revealed by the end, but not everything is tied up nice and neatly with a bow and don’t look for a happy and corny epilogue. I wouldn’t say that type of ending is a pet hate, but they do annoy me a little because they take away some of the realism again, I will take I am a morbid person and blame the true crime binges.

I would be lying if I told you this was one of the nice fluffy thrillers. This book tackles very sensitive and disturbing topics. However, Jon does implement considerable restraint when describing sensitive topics such as religion, suicide and mental illness which shows that these topics are not being used for purely shock tactics but as a realistic way to tell this story. There is no joy to be found in this story and I loved its gritty true and ugly underbelly.

Another testament to Jons writing is how his characters in this story is humanly flawed, complex and battling their own demons and each of their trajectories are very well-structured. I honestly wanted to reach into the pages to hug some, to shake others, and to kill a few.

If you want a realistic thriller without the fluff you have to read this book do not let it slip under your radar.