Today I am going to be sharing another game from my childhood. I don’t really care this game is over 20 years old because it’s great, it’s not up there with Dungeon Keeper when it comes to nostalgia, but it’s pretty close and I do have some great memories of playing this game with my dad. In this post I am going to be using a poster image I have found through google I do not own any rights and am using the image purely for review purposes (Fair use under the copyright act sections 29 and 30 under use for a review). 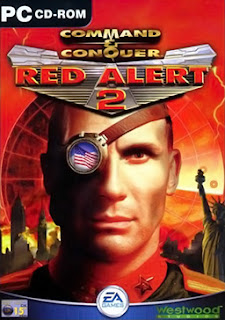 Red Alert 2 is set in the same alternative history universe as Red Alert in which Adolf Hitler was removed from history. With Hitler gone, the Soviet Union led by Joseph Stalin attempted to conquer Europe but was defeated by the Allied nations and their military destroyed. Fearing that a regime change would cause mass unrest in the Soviet Union, the victorious Allies installed Alexander Romanov, a distant relative of Tsar Nicholas II, as the puppet Soviet Premier. Romanov acquiesces to the Allies' demands at first, though he builds up the Soviet military for "defence purposes" – a cover for an intended invasion of the United States. The game's story line starts off in 1972, with the United States Armed Forces caught completely off guard by the sudden massive Soviet invasion of the United States, with Soviet aircraft, naval vessels, amphibious forces, and paratroopers coming in on both the East Coast and West Coast and with the majority of Soviet ground forces coming in through Mexico, starting World War III. The U.S. attempts to retaliate with the use of nuclear missiles, but Yuri, leader of the Soviet Psychic Corps and Premier Romanov's top advisor, uses his mind control to manipulate the personnel charged with launching the warheads and leaves them to explode in their silos. Within hours, the U.S. is overrun with Soviet Army troops. The player either takes the role of an American Commander, tasked by General Ben Carville with defending the United States, or a Soviet Commander leading the invasion for Premier Romanov.

I had recently replayed Red Alert 3 and has a little nostalgia for the first game in the series I played (Once again the second in a series). I was pleasantly surprised at how much I still enjoyed Red Alert 2. Before I restarted the game, I’ll be honest I was a little worried that I was misremember and that the game wasn’t as good as I remembered thankfully, I was wrong.  Okay there are some little niggles that are only a thing due to playing the games later sequels.

Even with the game focus on speed and action this is still a wonderful real-time strategy game, which is filled with exciting mini movies and game changing decisions (That I kept getting wrong). Yes, it’s an army game but the beauty in this game is that the game developers put a lot of thought into the units. Not only does each side have their own units that cover land, sea, and air but each of the units has a particular role to play in your overall strategy and game play.

There are two twelve-mission campaigns for each side. I found a fairly good range of missions that are balanced perfectly between 'build a base and kill all enemy units' to the 'take a few units and see if you can't infiltrate the enemy base.' Please don’t be put off by my stupidly basic explanation of the types of levels but there are lots of ways to get around particular challenges in the missions.

One thing that I will mention just shows how impatient I am and might just be a me issue. It's very simple in the sense as soon as you build a refinery, its miner immediately sets out toward the nearest mineral patch to get you ore to spend. It’s just so slow and you I am that impatient that I end up building a small army of refiners. Resource management is however key to this game and if you don’t manage them correctly you can end up in a rather sticky situation.

If you’re looking to play Red Alert 2, I am currently playing it on Origin. Overall Red Alert 2 is a classic real-time strategy game that you should revisit every once in a while, even just for the nostalgia.