I am slightly obsessed with Discworld again and have been making my way through the ones I have on audiobook. Anyone who reads Terry Pratchett will have a favourite character on the back of The Great A'Tuin on the discworld. From the great cities of Ankh-Morpork to Überwald you are guaranteed to find somebody in them you like. That's ’s the thing with Sir Terry’s world, there is such a diverse assortment of characters, you're bound to find one you can relate to or even many. 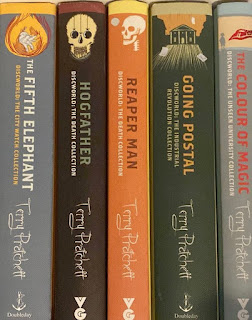 DEATH is my favourite character in the whole of discworld, if I am not greeted by either DEATH or Hades when a reaction finally kicks my ass I want to speak to the manager. DEATHS books are the only collection I still have in physical copy even though I read the eBooks don’t judge me.  DEATH in the series is not cruel and sees his job as a necessary public service check out Reaperman to find out what happens when DEATH decides to take time off. Like Hades and his bad reputation DEATH does not kill, they are only there to collect the souls. Death is fascinated by humanity to the point where they try with good intentions to imitate humanity but sadly, they lack the understanding to do so successfully A* for effort DEATH.

“IF PEOPLE KNEW WHEN THEY WERE GOING TO DIE, I THINK THEY PROBABLY WOULDN'T LIVE AT ALL.” - DEATH

I honestly love Angua she’s one of the first badass female characters I read. Angua comes from a family of werewolves and just happened to be the daughter of the Baron and Baroness of Überwald. She moves to Ankh-Morpork where she joins The Watch. I adore Angua and Cheery Littlebottom story line in ‘Feet of clay’ where she helps Cheery "come out" as a woman as in the Discworld dwarf society it is impossible to tell apart male and female dwarves as they dress and act the same. I also love the fact that if Angua kills a chicken during the full moon she goes back and slips a little money under the door. I would be that awkward werewolf.

Protect Cheery at all costs I am team Angua. Cheery isn’t a typical dwarf she hates beer and dislikes  gold. When we first meet Cheery, she is referred to as male because, for dwarfs, gender is not important. It is also impossible to tell apart male and female dwarves as all dwarfs have a thick beard, boots, and iron helmet. Her femininity is a close secret until Angua, with her werewolf nose, can tell Cheery's her true identity. Once Cheery identity is confirmed by Angua she embraces her gender and begins to adapt to the more forward-looking gender attitude in Ankh-Morpork. This doesn’t mean that Cheer has an easy ride other dwarves detest her and call her “Ha'ak" a derogatory word in Dwarfish. However, despite the animosity some dwarves have for her many are discovering that their 'sons' are dabbling in make-up and heeled boots and are "coming out" as female thanks to her

"Why not me?" - Cheery Littlebottom

I am currently making my way through the watch collection of the discworld series, and I have to say as an adult I appreciate Sam Vines a lot more than I did when I was younger. I am so sorry where are my manners I mean, His Grace, His Excellency, The Duke of Ankh, Commander Sir Samuel Vimes of the Ankh-Morpork City Watch the Ambassador for Ankh-Morpork and we mustn’t forget Blackboard Monitor Vimes. I think I find a lot of humour in the fact that Sam is such reluctant member of nobility and really has no idea how to act, he is the commander of the watch born into poverty and now his life has done a complete 180 flip. The brutal and almost comical way which Sir Terry shows Sam adapting to being a noble is almost realistic imagine one day just getting a load of servants and having no idea what to do with them.

“Odd thing, ain't it... you meet people one at a time, they seem decent,

they got brains that work, and then they get together and you hear

the voice of the people. And it snarls.” - Sam Vimes

I would like to become friends with any one of the Igors. The way the Igor’s speak in discworld is with the traditional lisp however sometimes they forget but keep up the act because people "expect it." Discworld fun fact of the day female Igors are called Igorinas, the only thing I don’t like about Igor’s is that they have a strange ability to be at your side or just behind you when you call them, I am jumpy person my heart couldn’t take it. Oh, and the satire that any door they open creaks like cute the first couple of times a years’ worth of creaky doors no thank you! One thing I didn’t really notice when I was younger is how all the Igor’s are called Igor and how they know what other Igor someone is talking about despite the speaker not telling them which Igor they are referring to it’s a little creepy.