Thank you so much Stephan. Tor and Black Crow PR for sending me a physical copy of A Taste of Gold and Iron by Alexandra Rowland for free and for inviting me onto the blog tour.

One thing I love about participating in blog tours is that I get introduced to new authors and genres I wouldn’t normally read. How Alexandra has slipped under my reading radar I do not know but their other books have been added onto TBR.

Title: A Taste of Gold and Iron 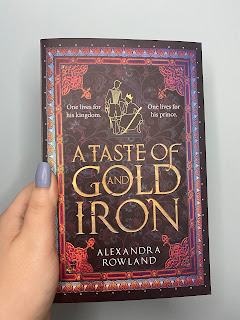 The Goblin Emperor meets "Magnificent Century" in Alexandra Rowland's A Taste of Gold and Iron, where a queer central romance unfolds in a fantasy world reminiscent of the Ottoman Empire.

Kadou, the shy prince of Arasht, finds himself at odds with one of the most powerful ambassadors at court—the body-father of the queen's new child—in an altercation which results in his humiliation.

To prove his loyalty to the queen, his sister, Kadou takes responsibility for the investigation of a break-in at one of their guilds, with the help of his newly appointed bodyguard, the coldly handsome Evemer, who seems to tolerate him at best. In Arasht, where princes can touch-taste precious metals with their fingers and myth runs side by side with history, counterfeiting is heresy, and the conspiracy they discover could cripple the kingdom’s financial standing and bring about its ruin.

Alexandra Rowland is the author of several fantasy books and is a Hugo Award-nominated podcaster. They hold a degree in world literature, mythology, and folklore from Truman State University.

The world was fascinating, with a Middle Eastern vibe, accepting of LGBTQ+ characters and relationships, with a female Sultan who has a male harem, I will never get tired of reading fantasy stories that are void of any queerphobia, and all the nasty aspects of our own world one of the main reasons I am hardly on twitter anymore. I appreciated the seamless use of different pronouns, and how normalised the sexual and gender fluidity are in this world.

Kadou and Evemer gave me the feels as they grew to be friends and then yearning for each other but there were times I wanted to bang their heads together and be like “you like him, he likes you! Now kiss.” However, that being said though this slow burning love I felt much more connected to them as individuals and as a couple and it helped me understand why there is so much miscommunication or lack of communication between them.

For me personally this book is more romance than fantasy but that doesn’t mean I didn’t enjoy it. The added layer of conspiracy adds tension and interest to the plot. The romance was a delicious slow burn, the plot had some great layers to it and there is also a focus on mental health with a focus on severe anxiety and panic attacks. The world building was brilliantly crafted, and with extraordinarily little effort from myself I could easily picture the architecture, the streets, and the wonderful and elaborate court.

I also want to quickly highlight the fact that Alexandra did a brilliant job managing the power dynamics of this story, I’ll be honest dear reader I have read a lot of smut recently and getting power dynamic right is crucial to a decent slow burn romance, the amount of books I have DNF’s because it just sits wrong is surprisingly high. Take a chance on this vivid LGBTQIA+ fantasy romance you might find a new favourite genre. 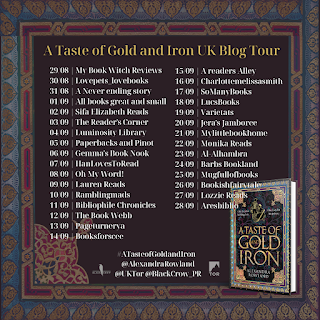