I know I’m far behind on this post, however I thoroughly enjoyed rewatching the film so thought I should repick up the book and made notes of the biggest difference and how I felt. This was the last book in Seth Grahame-Smith’s reimagining’s that I read as I didn’t know there was second book in this series. 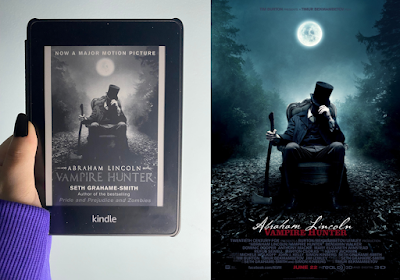 The book follows Lincoln throughout his entire life and mentions real people and circumstances that the real Abraham Lincoln dealt with. I did enjoy the glimpses into American history and the real people we meet along the way my inner history nerd was loving life even during this reread. Intertwined amongst the history and historical figures there are accounts of vampire hunting and vampirism. In several instances, vampires are even linked to historical events.

One thing I forgot while reading the book is there is no central villain character in the book compared to the movie, the villain of the book is simply the vampire themselves. Maybe I am just a Rufus Sewell fan girl, but he makes a brilliant villain. I kind of missed the added comfort from the familiar tension in the film if that makes sense to me a singular main villain adds more tension. One scene I am a little bitter that the film left out was a scene where Abraham Lincoln is in a bar chatting and drinking with Edgar Allen Poe my little gothic heart is mad.

The book and the movie are almost completely different in parts however both have their positives and negatives. But it feels slightly disjointed to be able to say that they both can be considered standalones while keeping the same storyline. If you’re considering one or the other, personally I would suggest watching the film first and see how you feel about the nonsensical nature of the plot and choppy style of storytelling.

I preferred the fighting in the film you can call me lazy, but it was a lot of fun. They style fitted into the style of fight scenes that had become popular in the early 2010s that followed through to Hansel & Gretel: Witch Hunters (2013) and even through to Pride and Prejudice and Zombies (2016).

I’m not saying Abraham Lincoln Vampire Hunter is a bad book but if given the choice between it and Dread Nation by Justina Ireland I would pick up Dread Nation.