I would just like to start with Netflix go have a word once again you cancelled the wrong thing you let Riverdale become whatever multiverse hot mess is going on, but you cancelled Sabrina. Please go sit in the corner and think about what you have done. 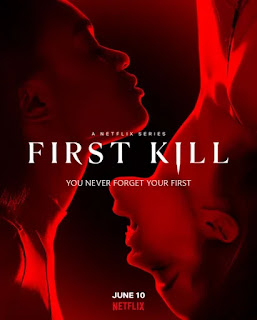 I LOVED this series and think it needs to be repicked up. Despite being a Victoria Schwab fan I have never read the short story First Kill which was included in the vampiric anthology Vampires Never Get Old: Tales with Fresh Bite.

I binged watched this series in day, don’t judge me. This series is a supernatural YA drama at its core and for me it felt like meeting an old friend. I think it’s down to me growing up watching and reading Twilight, The House of Night series or even The Vampire Academy. The story focuses on two teenage girls who fall in love despite their status as mortal enemies.

I thoroughly enjoyed getting to know the lore and the other creatures that exist in this world that has been created.  In addition to vampires, it comprises a whole world of monsters including zombies and banshees and ghouls. I do wish we got more of an in depth look the lore behind the monsters, but I think that’s down to me wanting to know everything. This also might be me being spoon fed to a degree by Buffy, Charmed and Supernatural.

I thought the characters where very well developed and thought out. I loved Ben; he added such a great human layer to everything that is going on and I really felt his pain at certain parts. Please stay with me as I try and explain this. You know how in some books, movies and tv series the humans find out that there is this whole other part of their life they knew nothing about and somehow, they are just okay with it. Like really you are okay finding out that Bill down the road is a werewolf and accidently killed your pet rabbit when you were 5 and you are totally okay about. It like really? Ben is very much not okay about finding out that there is this whole other world within his, its only because of his friendship with Juliet that he keeps his composure to a degree. I think most stories like this overlook this detail.

And thanks to Netflix I will never know the mysterious backstory for Juliette’s black-sheep brother Oliver a little is given away, but I need the satisfaction of a full deep dive not just the dirty little tease of the tip of the iceberg.

Given the mixed reviews this series got its clear that not everyone like First Kill and that’s okay were all different. The love story itself is full of angst and drama and teenage hormones that feels just like the books I grew up reading.  First Kill absolutely deserves a second series, if not to answer some of my burning questions and answer the giant cliff-hanger the series ends on.  I think that given the success of Heartstoppers and some of the reviews of First Kill we need more shows like this where it’s okay to be unashamedly gay and doesn’t take itself too seriously.