Interview with the Vampire Series

This is one time I actually mad that I live in the UK and not in America as of writing this (20/09/22) we don’t have date for this to air in the UK.  I guess this post will be a more what I am hoping to see when I finally watch this series. Spoiler alert for key plot points but at the same time the first four books are older than me and I was one when the film came out. 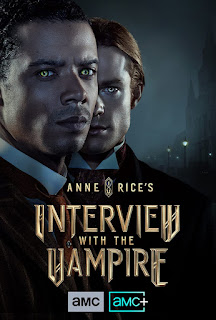 I know this has already been adapted and you might remember the film from 1994, starring Tom Cruise and Brad Pitt. As well as the Queen of the Damned film with Stuart Townsend taking over the role of Lestat. What my little gothic heart is freaking out at is that AMC has secured the rights to the full book series. Which means that we could see volumes like The Vampire Lestat, The Tale of the Body Thief, and more un-adapted works from this series eventually come to the small screen.

I read these books at a teenager at the suggestion of my aunty. One thing I thought I imagined was how homoerotic the first book was, and the film just glazed over all the gay vampires. It was till I reread the books I realised how much of the back stories of characters have been changed especially in Louis’ case. Where the backstory change is an endeavour to solidify his heterosexuality. But it’s okay to push the murky narrative of Louis and Claudias relationship.

Slight spoiler I had a disagreement with a friend because in the book Louis and Armand end up together but not in the film. Bish, I read the book I know more than the film! It wasn’t till I was older that I found out The Vampire Chronicles are well known for their homoeroticism that I thought I imagined while watching the film.

One thing I hope the series focuses on Louis reluctance to kill humans is also inaccurate in the film as he does kill humans in the book until he eventually learns he can live off animals. However, this doesn’t fully satisfy his vampiric thirst which directly leads us to Claudia. The end of the film is just wrong too I’m just going to leave that one there.

I guess what I’m hoping for is that they keep the characters origins and plot closer to the source material I say I’m not usually that hard on interpretations but now Anne Rice has passed I’m more annoyed at bits they changed.

Despite my apparent need for perfection that has appeared while writing this post. I think the movie does have its advantages and it is very beautiful to watch. If you would like a heads up on where the series could go, I have listed the other books in the series below.

Books in the Series