I will put my hands up and say I saw the film way before I finally read the book. This post is possibly going to turn into a reason why reading the book is better than watching the film first. Spoilers for both the film and the book sorry guys. I am using a poster image I have found through google I do not own any rights and am using the image purely for future review purposes (Fair use under the copyright act sections 29 and 30 under use for a review). 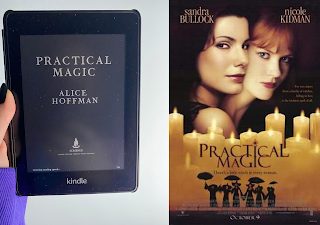 Before I delve into the difference between the book and film, I just want to say that I didn’t hate the book in fact I loved the book. I saw it as a standalone as the story itself is magnificent Alice manages to weave a little magic in every sentence. I love how Alice has approached the magic in her world differently from others the magic in Practical Magic exists almost as another force of nature. Unlike the characters in the film the characters in the book don't partake in the witchy steroptype by casting spells and brewing potions but they live in a world where some people have power to affects others and where wishes can do real damage. If you strip the book down to its bare bones It is just an enjoyable book about two sisters who grow up surrounded by a belief in “magic” and how one can manipulate them at one's will.

One important thing I expected as a key plot point to be shared with the book and the film is the curse. However, the book has no curse in it. The narrative is still there that Sally and Gillian’s parents still die, and so does Sally’s husband. But none of these deaths have anything to do with the curse and These deaths only serve the purpose of moving the story along. One thing that broke my little black heart, The Aunts are barely there in the book. I missed The Aunts in the book I think this is down to me seeing the film first and the fact I want Stockard Channing and Dianne Wiest to be my witchy aunts. Another stark difference was the descriptions of Gillian, Sally. In the book Gillian is described as a blonde siren of a woman in the book and ages at a rapid pace. While Sally is introverted and keeps most of what she wants to say on the inside. I couldn’t help but picture Nicole Kidman Sandra Bullock but thars a me problem not Alices

The book isn’t a bad book however I prefer the Practical Magic film with its lovable characters, heart-warming story, and touch of magic. For me personally the film is like the aunties it’s a warm hug where the book is the odd uncle.