Witches: James I and the English Witch Hunts by Tracy Borman

Today I have a nonfiction book about witchcraft that is written in a way that is easy to understand and doesn’t overly complicate things. I picked up this book as I know shamefully more about The Salem Witch trials than I do of what happened over here in the UK other than a basic knowledge of The Pendle Witches. 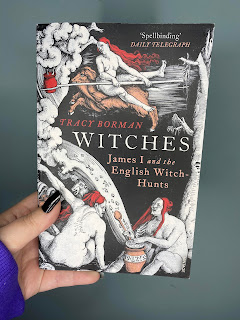 My only small gripe in this book is that Tracy says that the accusations made against women weren't necessarily sexist because they were often made by other women. A slight scrape into any witch trial throughout history you can easily see the internalised misogyny and how many women were accused because they were “promiscuous”, or different. One key point of interest this book does touch on well is how 'witches' were used as scapegoats, victims of religious extremism and how key figures within powerful organisations could uses these “witches” to boost their popularity or credibility no matter the cost.

This book focuses on Tracy’s remarkably comprehensive research into the case of the Flower women, Joan and her two daughters Margaret and Philippa. In 1613, the lives of Manners family of Belvoir Castle were plunged into catastrophe after both the sons died of sudden and unspecified illnesses within months of each other. Couldn’t possibly have to do with being alive in 1613 in England not to mention I think were technically in a plague rampant era. “The plague resurfaced roughly every 10 years from 1348 to 1665 there where 40 outbreaks in just over 300 years” Thank you Aunty Google. Plus, the usual, diphtheria, pertussis, and typhoid fever, dysentery and scarlet fever were overly common. Joan, Margaret, and Philippa were suspected of cursing the boys to death. All three women were captured, Joan did not survive the imprisonment, but a worse fate lay in store for her poor daughters.

The book also looks into the context of witch hunting, during the reign of James I. James I of England became obsessed with the power of witches after he visited his wife's native Denmark. He returned to England and drafted a seminal book on witchcraft, called 'Demonologie', which greatly influenced attitudes that led to the deaths of countless women. It wasn’t till after the Gunpowder Plot of 1605 that James finally turned away from hunting witches in favour of rooting out any Catholic conspiracies.

Tracy describes how people living during that time felt such panic of thinking that there could be witches living among them. It is interesting and sad that so many believed in witches back then and how much fear can really play into people’s morals and mentality.  Its unsettling to think how many women lost their lives because of a simple grievance and then being accused of being a witch, and unfortunately, these “grievances” cost some of those women their lives.

I enjoyed this book I think it will be a while before I pick another nonfiction book about witches, they always end up leaving me upset and angry. I torture myself I enjoy looking into historical events but the empath in me can’t cope.