To help set the mood for witchy week I thought I would recommend some of my favourite witchy films and tv series. I hope you find something fun to watch or get reminded of an old favourite.

Plot: Three small-town friends, Alexandra, Jane, and Sukie each having lost the man in their lives, are feeling unfulfilled until a furtive stranger, Daryl Van Horne arrives and begins courting each of them in turn. Eventually, Daryl tells them that they are witches. But as the three friends spend more time at his mansion, enjoying themselves and learning about their powers, they begin to worry about Daryl's ultimate intentions.

Thoughts: A timeless film that never seems to grow old no matter how many times I have watched it. While looking for a post image to use I came across this brilliant review, and I had to quote it “A movie that glorifies evil and tries to make it fun and sexy. Disturbing all around” I mean who doesn’t want to watch it now? 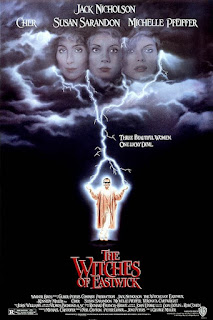 Plot: In the 17th century, five families with supernatural powers make a pact of silence. Eventually one power-hungry family is banished. The descendants of those four remaining families are heirs to tremendous power. Known as the Sons of Ipswich, the boys attend elite Spencer Academy. When a student there is found dead after a party, unravelling secrets threaten to shatter the pact that has protected the boys' families for centuries.

Thoughts: I am grown up to admit my friend and I used to call this film “four fit men throwing fireballs” I totally watched this film for the plot points when I was a teen. I really enjoyed the gothic feel of this film. Maybe I should watch it as a 29 year old and possible cringe? 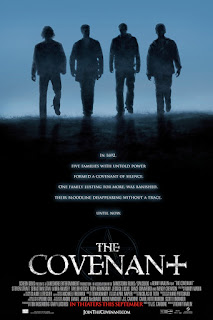 Plot: Set in the volatile world of 17th century Massachusetts, 'Salem' explores what really fuelled the town's infamous witch trials and dares to uncover the dark, supernatural truth hiding behind the veil of this infamous period in American history. In Salem, witches are real, but they are not who or what they seem.

Thoughts: I watched this a while ago and unlike most tv shows that revolve around or involve witches, this one isn't afraid of getting dark which is why I loved it so much. To me horror is not all about the scaring. Salem accomplished a different type of Horror, where you are reminds of why witch trials were such a big thing and society thought hanging women and girls was justifiable back in the 1600's. 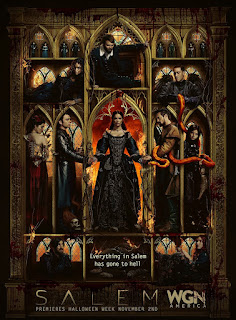 Plot: As her 16th birthday nears, Sabrina must choose between the witch world of her family and the human world of her friends. Based on the Archie comic. Reimagines the origin and adventures of "Sabrina, the Teenage Witch" as a dark coming-of-age story that traffics in horror, the occult, and witchcraft.

Thoughts: I really enjoyed this series and if you didn’t catch my post about First Kill. Netflix cancelled Sabrina so Riverdale become whatever multiverse hot mess that is going on, no I don’t care you had Sabrina make a couple of guest appearances the damage has been done. The series is intriguing, and frightening at times, the characters change and develop throughout the show in a believable way in the shows lore. This series is spooky at times, and other times you wish you had prayer beads with you, this show is not for everyone but if you love a good suspenseful tale give it a watch. 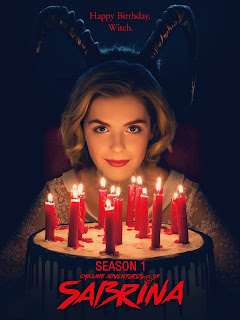 Plot: The story takes place in 17th century Italy, revolving around Ade and her brother who live in a world where women who are suspected of witchcraft are prosecuted, hunted by a group calling themselves the Benandanti. After losing their grandmother, Ade and her brother escape and find themselves under the protection of a group of ancient witches. There, she finds out that she's the chosen one and harnesses magical powers, quickly falling in love with Pietro, son of the Benandanti's leader, Sante. From here, Ade faces many challenges, including trying to figure out her past and who she really is.

Thoughts: I recommend however to watch it in its original language, Italian, with subtitles if you’re not a fan of English dubs as the translation and timing can be a bit off. It’s a slow burner at the beginning but as the story line continued it was full of surprises. Although its based off historic events, we still can't ignore the fact that Women were killed innocently and they definitely were punished for "crimes" they never committed. 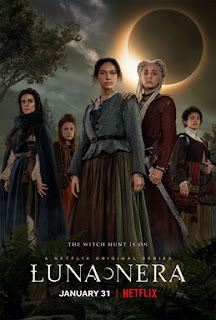