As soon as I watched the first two episodes of Rings of Power, I had to reread The Hobbit and The Lord of the Rings. I may have rewatched the extended editions of the films to, but I digress. I can’t actually remember the last time I reread The Hobbit, but it was like being greeted by an old friend. I do have a confession as much as I love The Hobbit film score, I ended up listening to the film score for The Fellowship of the Ring. 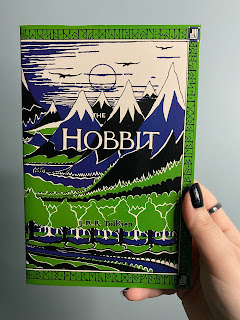 Fun fact of the day I have nerdy family and we spot check each other naming all the dwarves. My order is “wrong” because I don’t name them as Gandalf does but here, we go… Oin, Gloin, Bifur, Bofur, Bombur, Fili, Kili, Balin, Dwalin, Ori, Nori, Dori and Thorin Oakenshield.

Also, to my nerdy family dismay I read The Lord of the Rings first and it wasn’t till I played The Hobbit game on PS2 I was like oh wow this has a book I want to read it. I would like to say that I still have my first copies, but they have been well read and replaced three times since the early 2000’s.

This an enjoyable tale of adventure, friendship, and courage which was set in a beautiful, massive, and lore filled Middle Earth during the third age. There are magical beings in abundantly here. Hobbits, obviously, the wizard and the dwarves we meet at the start. Later, during the story we are introduced to the elves. Through remarkable story telling all these added races and people somehow manage to sit just on the outskirts of the story.

Tolkien keeps this epic story focused on one small Hobbit fighting his greatest fears...and winning. Even when you strip The Hobbit down to is bare bones It is a story about a hobbit who was too scared to leave his house without a hanky evolving into a Hobbit who finds his bravery along with courage and tricks a dragon. how can you not want to read this book or watch the film.

The story becomes darker as they close in on the lonely mountain. The poor little hobbit who never wanted to leave home comes face to face with trolls, giant spiders, giants, goblins, wargs, talking eagles, a dragon, and the infamous Gollum. One thing I love in The Hobbit is how the dwarves begin to rely on their hobbit burglar who they originally believed would become a liability.

One thing people who have seen the film might be stunned with is that the ending of this book is indisputably rushed. Surprise Bilbo is actually unconscious for most of it, and we receive a post battle update.  By doing this I think Tolkien reinforces the message of the story; it is not about the disastrous deaths of a dwarf, it is not about a boatman who slayed a dragon this tale is about a Hobbit.