A Time of Dread by John Gwynne

Thank you, Jamie and Pan MacMillan for sending me a copy of A Time of Dread by John Gwynne for free in exchange for an honest review.
Spoilers

This post marks my 100th blog post since I started on the 15th of April and I want to say thank you to every single person who reads my posts, retweets my post and just for the support I have received since I started. 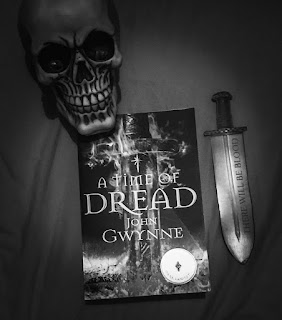 This is the first book I have read by John Gwynne and I now have his previous series Faithful and the Fallen on my to buy pile (Larger than my TBR pile).  For me personally, I don't think it really mattered that I hadn’t read Johns previous series but once I buy them I’ll probably read them back to back to see if there are any Easter eggs. However, I am extremely grateful I was able to read A Time of Dread, the start of Johns new trilogy called Of Blood and Bone and get introduced into Johns style of writing and worlds. Check out my review of book two here.

Set little over 100 years after the events of the last series, the story follows four new characters in the same world but altered from the results of the last book. Many years ago, the Kadoshim, demons of the Otherworld, broke free from their spirit world to inflicted chaos and destruction upon mankind.  Fortunately, their immortal foe, the Ben-Elim, warrior angels, followed them into the Banished Lands. A ferocious battle followed but an alliance among the Ben-Elim, humans and giants lead to victory. The Ben-Elim now rule the land now from their base at the fortress of Drassil, even partnering with a fighting force of humans known as the White Wings as they purge the last of the Kadoshim from the lands. The Ben Elim have banned any conflict between the human factions, enforcing the ruling with an iron hand. The Kadoshim's leader, Asroth is encased in iron within the Ben-Elim's stronghold but his faithful Kadoshim are growing in strength and they’re making plans hoping that their side will one day rise again.

A Time of Dread is told through the perspectives of four characters, with the book focusing on the four characters perspectives we get to know the characters very well without it affecting the storytelling. I loved experiencing Johns world from the different points of view, it is also easy making the switch between characters and it makes the chapters all that more enjoyable.

The story explores what happens to those in a position of unchecked power, focusing on the morally grey areas and shifts stereotypical fantasy tropes of a clearly defined line between good and evil. Of course, we all know it’s not quite as simple as that. The book starts slowly as the characters and the history of the world are gently and cleverly explored.The history John has created is impressive when describing events from 120 years before elders explain the history to younger characters.

As the book continues there are a number of underlying sinister hints building a dark foreboding in fitting with the title. One thing I particularly enjoyed was the lack of any prophecy that could have been invented or changed. It is honestly just a mess out there. The characters are amazing and the tension that John creates positively grows into a monster that makes you hold your breath.

John points out in such a brilliant way that time has a way of making people forget and become complacent.  People no longer remember the lessons that the war taught them and indeed some have even begun to doubt that such evil exists.