Hello Readers,
Today we are going to be looking at the Book Good Omens and on Friday I will be reviewing the Amazon series. If you’ve followed my blog for a while you know I love Sir Terry Pratchett’s work. I also have a lot of love for Neil Gaiman I just don’t think I am as vocal about it (sorry Neil).  I’ve tried to do this without spoilers because I know some people will read the book after seeing the series. 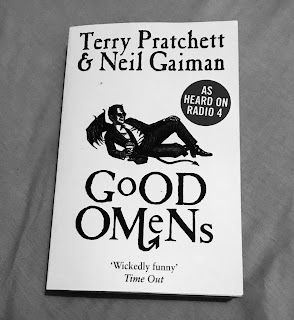 Good Omens is a comedy about the birth of the son of Satan and the coming of the End Times. Kind of a spoof on the movie The Omen if you can consider a work a parody when it's arguably better than the original source.  A son has been born to Satan. His agents, notably the demon Crowley who is managing the whole project, it just so happened that a string of events means that an American diplomat’s wife is set to give birth that very night to a son, in a hospital in the English countryside, which happens to be staffed by nuns from the Satanist order.

This will allow a switch to be performed, leading to the devil’s child being brought up in a family which will provide him with the opportunity to plunge the world into the chaos that leads to Armageddon. It just so happens another lady happened to go into labour early and followed the diplomat’s wife to the hospital. However, when a scatterbrained Satanist nun goofs up a baby-switching scheme and delivers the infant Antichrist to the wrong couple, it's just the beginning of the comic errors in the divine plan for Armageddon.  So, we have the diplomat’s child Warlock, the child who everyone thinks is the Anti-Christ, is a normal eleven-year-old boy. which means the poor couple from Lower Tadfield have the real Anti-Christ Adam.

the Apocalypse is near, and Final Judgement will soon descend upon the human species. Things really do look dire. Except, someone seems to have misplaced the Antichrist (how rude of them) and the angel (Aziraphale) and demon (Crawly/Crowley) who have been keeping an eye on things since mankind was evicted from Eden team up to stop the impending apocalypse. Aziraphale, an angel who doubles as a rare-book dealer, and Crowley, who was originally named Crawly, was the serpent who tempted Eve to eat the apple.

The two of them have grown accustomed to life on earth and have come to enjoy it. No more antique bookshops and no more elegant cocktail bars! The prospect leaves them both distraught and, having come close to being friends throughout the centuries despite competing against each other, they collaborate to see if they can find a way of preventing Armageddon without being caught. Aziraphale’s and Crowley’s plan is to keep an eye on the “Antichrist”, destined to be the son of a prominent American diplomat stationed in Britain, to ensure he grows up in a way that means he can never decide between Good and Evil, thereby postponing the end of the world. As the appointed day and hour approach, Aziraphale and Crowley blunder through seas of fire and rains of fish, and come across a misguided witch hunter, a middle-aged fortune teller and the Four Horsepersons of the Apocalypse.

Good Omens is by far one of the greatest collaboration books I have ever read. Terry’s and Neil’s have managed to create a story that weaves together large doses of satire, cynicism, slapstick and wacky unconventional humour. Terry’s and Neil’s writing styles complement each other beautifully, bringing out the best in both. The characters, one of the biggest strengths in this book, they are incredibly well rounded, and the humour of the book is such that it stands up to multiple re-readings and you will still find yourself gigging over sections.

I honestly have everything crossed that the success of the Amazon series means that more of Sir Terry’s work will be adapted to screen.

If you could see any book adapted to screen what would you pick?