Thank you, Julia and Titan Books, for sending me a copy of all of The Relics Trilogy by Tim Lebbon for free in exchange for an honest review.
Spoilers

We are starting the Relics Trilogy by Tim Lebbon week with the first book in the series, Yes, I actually read this one in the right order (Still sorry Murray Bailey). This is the second book by Tim that I have read the previous being Alien: Out of the Shadows. 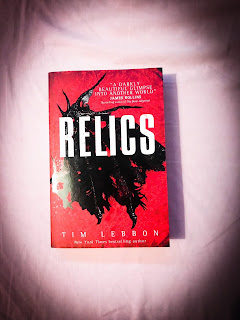 Relics is the story of Angela Gough, an American criminology student living in London with her boyfriend Vince an estate agent and who is more than he seems. they seem to be very happy together and Angela is just living her life, spending her days working on her PhD in criminology. Angela is described as someone who is very logical and able to compartmentalise her life.

However, when Vince suddenly goes missing and leaves a note telling Angela not to come looking for him, Angela’s not having it and she soon uncovers Vince’s secret. From the moment Angela finds that note, Angela’s life becomes a quest to find out what happened to Vince to make him walk out on her. When he disappears, she fears the mundane: a new lover, an accident, or even murder.

What she discovers is anything but… a whole other world exists; the stuff of myths and legend start to become real in a nightmarish chase in the depths of London's underground tunnels and a world she needs to become part of if she has any chance of recovering Vince alive.  the hidden world of the Kin, creatures who existed alongside humans yet are rarely seen.  What Angela finds shatters her view of reality, unveiling a new world uniting with ours, one that might spell disaster for all of mankind.

Vince wasn’t involved in drugs, or gun running, instead, he is a relic hunter. Relic hunters are people who hunt for the remains of mythical beings from a Time Before when giants roamed the earth and unicorns raced through meadows before humans became the dominant species. Fairies, goblins, and nymphs, secret fantastic creatures that were part of the fabric of existence. Vince works for criminals and gangsters obsessed with the relics and trade in a black market of artefacts including body parts and life-threatening illegal transaction. During the course of her investigation Angela meets a host of unsavoury characters who unknown to her, Vince was mixed up with.

She discovers allies in this journey, the human ones possibly more deadly than the others she cannot understand, with everyone promising to be the saviour of her lover. There are a lot of weird and wonderful beings in this book, all of whom have lived longer than average lives and have their own motives and agendas which conflict with one another. However, all of them have agendas which run darker than blood. This book is full of misdirection from characters either trying to hide what they are or lying to protect their interests. These mythical beings are clinging on to their survival and have very different ideas on what their future should entail, some wishing for peace while others seek our destruction.

In Relics, Tim has created yet another wonderful world for readers to lose themselves in as the world building is absolutely stunning. Tim understands how to write a thriller, full of chases and revelations, as well as bravery and boldness, he gives us a solid, entertaining novel that introduces readers to an unknown London. Tim’s writing seduces the reader and they find themselves immersed in the fantastic, horrific roller-coaster ride which ends too soon.

Relics is a powerful yet wonderful introduction to an intriguing world