Hello Readers,
Thank you, Julia and Titan Books, for sending me a copy of all of The Relics Trilogy by Tim Lebbon for free in exchange for an honest review.
Spoiler Free
Publication day: 25th June 2019

This has honestly been one of the hardest reviews I’ve done in while; I tried really hard to not spoil the book for people and re-wrote the post four times. I didn’t want to be responsible for ruining the surprise - it's not fair and I hate it when other people do it. So, what I’m going to do to avoid any spoilers is include the synopsis and focus mainly on Tim’s writing and in a months’ time, I will let all the details out and re-do the post I have. 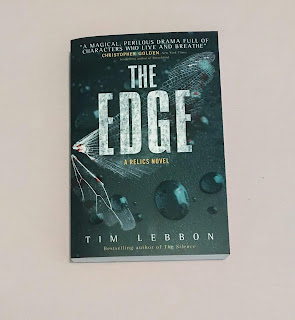 Synopsis from Waterstones
A diseased town-long hidden beneath a lake-rises from the depths to become a focus of the war between humankind and the Kin. Beneath the surface of our world, mythological creatures and their artefacts still exist. As with a rhino horn, a tiger's bones, or a monkey's paw, corrupt people pay fortunes for a sliver of a satyr's hoof, a gryphon's claw, a basilisk's scale, or an angel's wing.

These criminals also sell living supernatural creatures, whole or a piece at a time, to be harvested for their supernatural essence. Having become embroiled in the secret world of the Relics, creatures known as the Kin, Angela Gough is on the run in the United States.

Forty years ago, the town of Longford was the site of a deadly disease outbreak that wiped out the entire population. The infection was contained, the town isolated, and the valley in which it sits flooded and turned into a reservoir. The truth-that the outbreak was intentional, and not every resident of Longford died-disappeared beneath the waves.

Now the town is revealed again. The Kin have an interest in the ruins, as do the fairy Grace and the Nephilim leader Mallian. The infection has risen from beneath silent waters, and this forgotten town becomes the focus of the looming battle between humankind and the Kin.

A review of Tim’s writing SPOILER FREE ZONE
Tim understands how to write a thriller, full of chases and revelations, as well as bravery and boldness. He gives us a solid, entertaining novel that introduces readers to an unknown yet familiar world. The world Tim has created for The Relics Trilogy is similar to our own with the added element of myths and legends.  Tim has an exceptionally effortless way he conveys his vision of urban fantasy to his readers and the feeling of dread that brings to the narrative to life, is exceptional and when it explodes it is done beautifully. Tim’s writing seduces the reader and they find themselves immersed in the fantastic, roller-coaster ride. One thing I noticed while reading this series is, I ran out of book relatively quickly and was a little surprised how easy and effortless this series was to read, this is purely down to Tim’s writing and pacing ability.  The way Tim manages to effortlessly combine both dark fantasy (original tales) and fantasy element is something I am going to miss.

Again, Tim has masterfully blurred the lines not only between reality and his world but between who is good and who is bad. Just like its predecessors, The Edge is a great combination of science fiction and mythological figures, along with magical happenings. It remains throughout to be unpredictable, amazingly imaginative and completely terrifying and yet can’t help but turn the page to find out what happens next. What we have is a book that expands and adds and complements the first two book in the series.

One thing I will say that isn’t really a spoiler as we know this is a trilogy is that I am sad I won’t be re-entering the strange and magical world that Tim has created for The Relics trilogy. I know I can always reread them but a little of the magic is gone.

I honestly can't recommend this series enough I think it is the quickest trilogy I have got through in a while. One thing I will say is to try not to read any spoilers and go into these book blind like I did.