Hello Readers,
Thank you, Julia and Titan Books, for sending me a copy of all of The Relics Trilogy by Tim Lebbon for free in exchange for an honest review.
Spoilers

We are continuing the Relics Trilogy by Tim Lebbon week with the second book in the series. This is the second lot of books by Tim that I have read the previous being Alien: Out of the Shadows.  If you missed my review of Relics the first book in the series here’s a link. 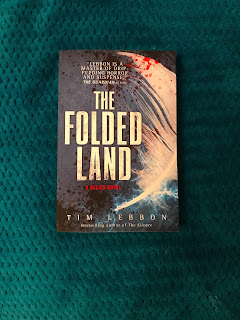 In this second book in the series we go back to the hidden world of the Kin, creatures who existed alongside humans yet are rarely seen. In Relics, an American criminology student Angela found out about the Kin and her whole life changed because of it. She and her lover, Vince, faced gangsters and helped the Kin. The Folded Land picks up where Relics left off Angela is on the run, blamed by the police for the massacre that concluded Relics and by the surviving relic hunters, for the loss of their friends and family. Angela has fled to the USA and tries not to attract the attention of those who hunt her and she has discovered that the Kin are not only found in London but are everywhere.

Until she hears from Vince that her niece, Sammi, has been struck by lightning, twice, Freak event or sign of the presence of a powerful Kin? When Angela finds out Sammi is hurt and missing and that there is Kin-killer on her tail, the group head straight into danger to rescue her. The creature that kidnapped Sammi just so happens to be the fairy she and Vince helped to save Relics. Angela teams up with her boyfriend Vince, who has been working with the Kin to find Sammi before the others do.

This is an excellent follow-up to Relics, possibly actually better than the earlier book. The story is delightfully fast-paced and well written. Tim keeps things on the move and delivers a couple of surprises along the way that took me by surprise. There is a notable shift in tone from the first book, as Angela has to engage with what the existence of the Kin means for humanity. The story has really ramped up from Relics, with the illusion and secrecy dispelled Tim has gone the extra mile for mythology.

Tim delves deeper into the world of the Kin and reveals that the Kin are everywhere around the world and how the Kin live in the shadows, hide themselves from humans and evade them in order to survive.  Tim also reminds us of a time when the Kin and the humankind once existed alongside one another, but that time has passed and is ancient history that only a few still remember. I could share some examples of what lies within the fold but that wouldn’t be fair let’s just say that I learned of a couple of new myths and legends reading this novel. Which excuse the geekiness coming through but I loved doing my own side research on the new myths and legends.

The characters are wonderfully diverse because the author writes about humans and various members of the Kin. Both the human characters and the members of the Kin are well portrayed. I thought the insights into the history between the Kinfolk and Humans was compelling. The Kin are bewitching, delightful, so rare and special but they are also inhuman, savage and powerful. Tim has paid a lot of attention to the interaction between the humans and the Kin which makes his work even more believable. People think of fairies and magical beings as friendly or childlike because of Disney versions of old stories or nursery tales. However, the real supernatural creatures in this novel are more like the original tales.

It's an excellent horror story and I honestly can’t recommend this series so far; I can't wait to tell you guys all about The Edge on Friday.