The Boy Who Followed His Father into Auschwitz by Jeremy Dronfield

After reading The Tattooist of Auschwitz and When I Fall,I Shall Rise I ended up reading a lot of historical fact/fiction medleys. Just a warning this book has some dark moments and was hard to read at some points that being said these horrific events happened and skimming over the words isn’t going to make that fact go away. 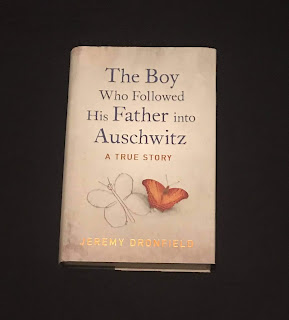 People who know me in real life have even asked me why I read so many Holocaust survivor memoirs and I think it's because I believe everyone has to know some of the stories in a less fluffy version of what’s taught in school. Yes, books like this one are difficult to read but we need to learn from people’s experiences so history does not repeat itself. This book reminds us of the dangers of what can happen when you dehumanise a human group and anything goes and that the words ‘we shall not forget’ should never become an empty phrase.

One thing that does scare me when I read Holocaust survivor memoirs and even historical documentaries is how easy mob mentality turned against a type of people and what happened. How many people turned a blind eye to the suffering because if they didn’t, they would have been killed or taken to a camp. How anyone could have the mindset to think to treat fellow human beings in such an atrocious way is right still blows my mind. Also, how anyone could survive these camps is unbelievable when you peek behind the curtain (Further education than school fluff). With that said now to the review.

This book is an incredible true story of strength, sacrifice and courage. This true story is about the Kleinmann family, mostly focusing on what happened to the father Gustav and eldest son Fritz. Jeremy takes us on their horrific journey, from the betrayal by their ‘good’ neighbours, to systematic demonisation, dispossession and ‘transportation’.   Gustav and Fritz were seized by the Nazis and thrown into various Concentration Camps before finally ending up in Auschwitz with only the love and support of each other as comfort. At times it seemed that the strength of one was the only thing that kept the other going and it was beautifully written and portrayed.

This book was both heart-breaking and difficult to grasp. Jeremy is doesn’t turn a blind eye to the selfish instinct for survival that, is a part of the camp narratives which if you’ve read tattooist, you’re not that surprised about it but it’s still a slap to the face. There will be times when you want to be angry but this is history and it happened getting mad can’t change anything and it is also basic human nature to survive in any way possible hello Stockholm syndrome. Also, let's be honest you would do anything to make you’re suffering a little less for a little extra food or cloth.

This book is both tear-jerking and inspiring I cannot gauge the cruelty that can be brought out in humans and I cannot stop being amazed at the bravery and persistence of those who survive. It isn’t all doom and gloom there is comradeship, friendship in some surprising places and has some good luck thrown in.

I spent the majority of this book in absolute horror (despite other books I have read) of the way that people were treated. However, the love between Father and Son with their unconquerable spirit and refusal to give up despite horrific punishments was awe-inspiring. Even the reunions are treated simply, without fuss and without ever forgetting the appalling weight of suffering behind them. This book is an unashamedly emotive and a deeply moving story. I will never forget this courageous family and all of the other families all over the world that suffered during the holocaust.