Thank you, Jamie and Tor for sending me an ARC of Dragonslayer by Duncan Hamilton for free in exchange for an honest review.

Today is the final day of dragon week I have looked at Dragon Mythology,  Paul Cude’s Bentwhistle series (Gifted) (A Threat from the Past, A Chilling Revelation, A Twisted Prophecy and Earth's Custodians) and Turning Darkness into light by Marie Brennan (Gifted). 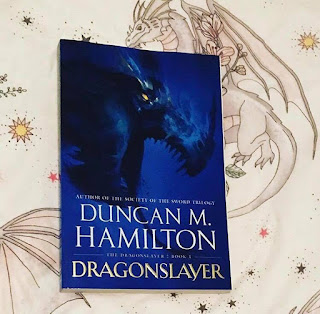 I will be honest I was a little torn about this book. On the one hand, I loved it and the characters but for me, the story lacked a bit of background information. However, I do not know if this is down to me being spoiled lately with vast extensive world-building.  I also had an issue with some unanswered questions as to why things happen and at times the logical implications of men and magic were simply set aside. While the background was lacking the amount of depth in every character that you meet is wonderful and well developed and thought out and you can understand their actions even if you don’t agree with what they do or say.

I loved Guillot (Gill), a tarnished knight, a laid-back Hero you can’t help but like the more you get to know him. Gill was previously the best knight and a great swordsman and champion of the king.  When the book starts he's been away from the capital for about 5 years and has become a drunk and let himself go. This points at a slight problem, he's entirely human, as we begin to see glimpses of the man he once was and the man he could become, he grows on you, you can't help it. A dragon has been woken up, despite dragons no one seeing a dragon for centuries. Gill must pull himself together to face this foe. However, he's out of shape and just drinking away his money. Gill is called to meet the new king and help with a new threat in the land. Along the way, he has to determine who is his friend are and is he just fighting a dragon or is there more to this than anyone thought possible.

On the way to the capital city, Gill rescues Solène, a young barmaid, who is about to be burned as a witch. The whole "she's a witch, burn her!" trope was handled nicely, with Gill calling out the villagers and shaming them for their deeds. Gill believes she is innocent…but Solène soon proves that she has plenty of raw, untrained power, a problem in this land, where magic is forbidden. I had so much love for Solene, she is strong, capable and there is so much potential in her you know she is going to grow into her powers. You might expect that almost being burnt alive to have some impact on Solène, but nope she shrugs it off by demanding a place on Gill quest.

My favourite character by far was Alpheratz the Dragon his point of view was what kept me coming back for more. Duncan humanises dragons, gives them memories and purpose and emotion and flips our sympathies from cheering on the deaths of monsters to mourning the loss of these magnificent beasts. Getting to know Alpheratz and his true motivations was perfect and you really are in for a roller coaster ride.

This book is honestly wonderful for its characters, I think it will be one I have to reread again and update my review. Happy reading