Heroes of Hastovia Book 3: In Memory of… by Mark Boutros (Gifted, Paid)

Thank you, Mark, for allowing me to beta read a copy of your book Heroes of Hastovia Book 3: In Memory of… in exchange for an honest review. There is going to be a slight spoiler in this book if you haven’t read book two (Rise of the Deathbringer) sorry in advance. Please excuse any mistakes this post was written and edited during reaction recovery. 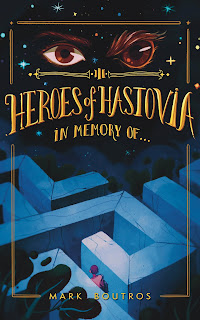 It's time I cannot deny it anymore the final Heroes of Hastovia book is out in the wild. One of my favourite fantasy series in recent years has ended… YES MARK I'M STILL DEVASTATED. Mark did warn both Lauren (check out Lauren's review here)and I before we got beta versions of this book that it was going to be an emotional ride and he was not joking. As much as I am going to hate to admit it this book is a great and fitting ending to the trilogy. As with the first two books in this series, I read this book in one sitting You can check out my reviews of The First Adventure and Rise of the Deathbringer by clicking the titles.

So, Karl is dead like dead, dead. None of this he’s magically going to come back alive so the books can continue overdone story arc. Instead, we get a deeper story about dying and if there is something after death how would we realistically cope. I think I might be me projecting onto Karl with my anaphylaxis but for me, Karl dealt with his resentment at dying feels real like anyone would second guess if they did the right thing.

He’s outraged he didn’t die in a blaze of glory, he’s furious he’s dead and he’s infuriated death is more mundane than his actual life which sucked let’s be honest. So, no wonder he goes on another adventure in the afterlife. He chooses to escape into the unknown and search for a maze that will either give him a second chance at life or make him dead, dead. Oh, come on we all know when you die in the land of the dead you are dead, dead.

There are moments during this book where Mark just stabs you in the feels. There are beautiful yet soul-destroying moments involving lightflies in this book. Lightflies act like a portal to the land of the living, you can use them to see your loved ones. What would you do to get your hands on that last remaining bit of joy in your life/afterlife? This brings into question what would you do if the lightfly died before you knew your loved one was safe would it be worth the anguish.

I don’t know why maybe it’s just me as a person but for me personally, Mark writes brilliant yet believable villains, you want to loathe them, but you adore them.  It is bloody annoying when all you want to do is hate them and their action but then the humanity deep inside them comes, you’re they like okay, yeah fair play. Okay, I confess it I just me because I want to be friends with the two villainesses in this book Batlover and Zianfer hit me up let’s go get a coffee.

Arazod my dear birdbrained frenemy, which is all I have to say!

Like its predecessors, this book is filled with rich and beautifully descriptive locations and characters. Minus the whole having to die first I would once again live to visit this part of Hastovia. I would like to finish this review how I finished the first You will be swept away in the wonderfully whimsical world of this book series and will eagerly be right alongside our bunch of misfits for the ride. To see the world as they do and encounter magnificent creatures.

Check out Marks website for more on the Heroes trilogy