Our final serial killer is Lizzie Borden, tell me honestly do you think she did it?

As with the other serial killers I have mentioned this week, I am still missing out the details if you really need to know you can do your own research. No copyright infringement is intended the photo is used for educational purposes. 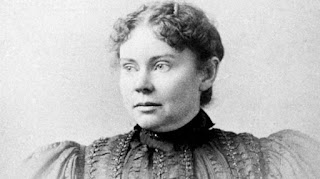 You must have heard the rhyme?
Lizzie Borden took an axe,
And gave her mother forty whacks,
When she saw what she had done,
She gave her father forty-one.

The popularity of the poem is a testament to the public's fascination with the 1893 murder trial of Lizzie Borden. Lizzie was an American woman suspected of murdering her stepmother and father in 1892; her trial became a national sensation in the United States. The source of that fascination might be brutal nature of the crime given that Lizzie was female and young and also the fact the jury's acquitted Lizzie despite the evidence that most historians find compelling.

Let us rewind a little. Before their murders, Andrew and Abby had been living in the humble, Greek-Revival house on Second Street with Andrew’s grown daughters Emma and Lizzie as well as their maid, Bridget Sullivan. Lizzie was popular and engaged in charitable work. Her father, by contrast, was supposedly stubborn and ungenerous as well as exceptionally wealthy and apparently, Lizzie and her elder sister Emma were at odds with him and their stepmother, often over financial matters.

On a Thursday morning, August 4, 1892, Mr Borden left home to conduct his business, leaving in the house, Emma was out of town, staying with friends, on that fateful day, leaving only Lizzie and the maid at home when the murders were committed.

On his return, Mr Borden settled on a couch for a nap. About 11:15 AM, Lizzie discovered her father dead and upstairs his wife’s body was found. Two key facts seemed to rule out a stranger if I’m honest. Firstly, the front door and basement door was locked and secondly, even if the killer had found a way inside, the hour and a half interval between the murders seems odd.

Police found a hatchet in the basement though free of blood was missing most of its handle. Lizzie was arrested on August 11th a grand jury began hearing evidence on November 7th and indicted her on December 2nd.

It was found that Lizzie had tried to purchase a poison on August 3rd, and a few days later she was alleged to have burned a dress in a stove. Bridget, who had also been suspected was reportedly seen leaving the house carrying an unexamined parcel the same night.

Lizzie was arrested and tried for both murders in June 1893 but was acquitted, given the evidence. She was nonetheless ostracized thereafter
People refused to sit near her at church. And children, probably daring each other to tempt the murderess, would ring her doorbell in the middle of the night and pelt her house with gravel and eggs.

Good on Lizzie though despite all this she stayed in Fall River, Massachusetts, until her death in 1927.