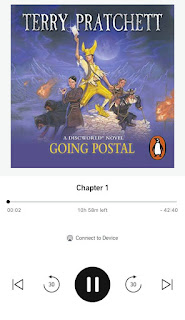 There is no secret about the fact I am a huge Terry Pratchett fan what might surprise some people that Going postal is on here and not Reaperman sacrilegious I hear you cry. I do love the audiobook of Reaperman, but I prefer reading it compared to listening to it I love seen DEATHS words. I also prefer the audiobook of going postal compared to the tv dramatization it’s not bad by any means I’m just being picky. I love Stephen Brigg who I think has narrated about 90% of Sir Terrys work for me he is the voice of most of the characters in my head. Also, special shoutout to the little jingle that is at the start of each of the discworld audiobooks for me its like that moment when you hear the opening of The Lord of the Rings, if you know you know. Full book review here. 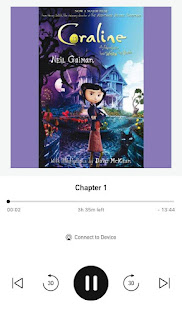 Fun fact readers this was the first review I ever posted on my blog over four years ago. I had been meaning to read Coraline for years then I saw that Dawn French was narrating the audiobook and I had to listen to it. I grew up watching the Vicar of Dibley and French and Saunders so I might be a little bias, but I love Dawn narrating Coraline. I have read the physical book since I wrote that post and I found I missed Dawns narration and the voice she does, and I didn’t think I would, and I honestly don’t think I enjoyed the book as much. I think it’s because I made the mistake of not reading the book first before listening to the audiobook. I think I was spoiled in a way that I saw the film then listened the audiobook but that’s my own issue. Full audiobook review here. 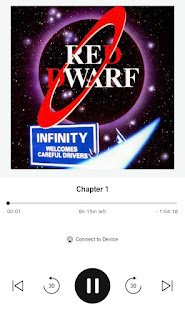 The Red dwarf books are narrated by Chris Barrie who plays Rimmer in the TV series. He has an amazing knack of impersonating his friends to the point it’s a little creepy how on point his voices are. Obviously, his Rimmer is first class but his depictions of Lister, Holly, Cat and Kryten are all spot on and pretty close. I did grow up watching Red Dwarf and I might be bias, but I really enjoyed the audiobook they pretty much along with the tv series but also give you a little more than the series if that makes sense. This book is honestly as funny as the series you won’t be disappointed if you’re a Red Dwarf fan. Full audiobook review here.

Kill or Cure by Pixie Britton 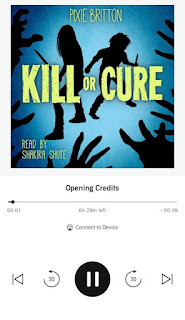 It’s no secret that I love the Kill or Cure trilogy by Pixie Britton and way so excited when Pixie told me that the first book in the trilogy was being made into an audiobook I may have squealed. I was gutted when this series ended, I adored becoming friends with Pixie through the series publication and having the series come back so to speak on audio meant I got to relive the joy and excitement of the books becoming “new” again. Kill or Cure was one of the first books I got approved for on NetGalley and will always hold a place in my heart. This is the first book I have listened that has been narrated by Shakira Shute and I have been following her on socials ever since. Full audiobook review here.

Confessions of a GP by Benjamin Daniels 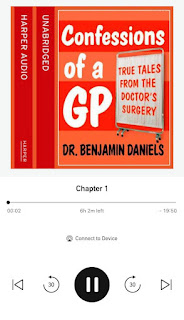 This was one of the first audiobooks I got from Audible years ago ironically during a hospital stay. It sounds horrible but this is my go-to book whenever I want a cheap laugh at my current condition. Call me morbid. I must have listened to this book more than six times and there are still some stories that make laugh out loud and even snort. This book really is a roller coaster it alternates between sad, heart-breaking, hilarious, and just plain gross!  is quite refreshing. Doctor Daniels doesn't really allow the listener to wallow in the darker side of being a doctor for too long. Full audiobookreview here.